YouTube’s new incognito mode for Android is out

Ever wish you could use the YouTube app to watch a video without it showing up in your watch history or tainting your personal suggestions? Basically, Chrome’s Incognito Mode, but for YouTube?

Now you can. While it’s been in testing for some months, Google is now rolling out Incognito Mode for YouTube widely, and it works just as you’d expect: nothing you watch goes into your search or viewing history, and you can easily pop in and out of Incognito. You can enable the feature by tapping on your avatar, which will bring up a menu. There you’ll see a “Turn on Incognito” option, replacing the Sign Out button.

“When you turn off Incognito or become inactive, your activity from this session will be cleared and you’ll return to the account last used,” a message reads when you tap the option. 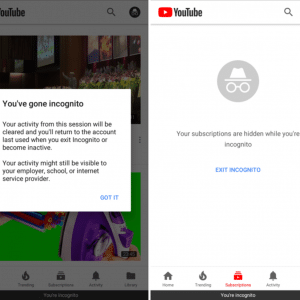 “Your activity might still be visible to your employer, school, or internet service provider.”
The Google hat-and-sunglasses icon in the top-right and a “You’re incognito” bar at the bottom on the interface will remind you that your activities aren’t being recorded, 9to5google notes.

However this is available now only on Android, while YouTube didn’t immediately respond to a request for comment about the mode being added to the iOS version of the app.