Today Apple introduced the iOS 11.4 update. Now, what has Apple focused upon this time ?

The new update is audio-oriented and lays much emphasis on media and entertainment, including the launch of AirPlay 2 and support stereo pair for HomePod. With the new AirPlay 2, it will allow you to play music and other audio in your home to different devices, all in-sync. Now, how cool does that sound! You can literally play music from one room to another or play the same song everywhere using an iOS device, HomePod, Apple TV, or by asking Siri.

You could ask Siri for instance ‘Hey Siri! Play All of Me by John Legend in the kitchen’, and this can play while there is something else playing in the bedroom. You can also adjust the volume across all the devices. It will allow you to answer a call or play a game on your iPhone or iPad without interrupting playback on your AirPlay 2-enabled speakers. Apple has been positioning its speaker to better compete with more high-end audio systems, like Sonos or Bose. Stereo pair support will allow it to better compete on that front, but device sales could be held back by those who prefer Amazon’s Alexa assistant, which ships on the Sonos One, to Apple’s Siri. A number of speaker manufacturers are already committing to support AirPlay 2, including Bang & Olufsen, Bluesound, Bose, Bowers & Wilkins, Denon, Libratone, Marantz, Marshall, Naim, Pioneer, and Sonos. 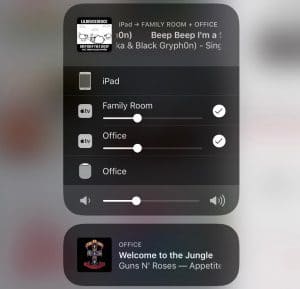 Also, the new iOS update brings about changes on iMessage. The messages in the cloud which sync across all devices and deletes iMessages across everything, so your local storage does not get cluttered. It also backs up iMessages so that any new device in the account can get old iMessages without restoring a backup. Being able to access your entire conversation history, Messages in iCloud will be especially helpful to those who tend to save their all their conversations but have a device without a lot of storage. It frees a large amount of storage space on your phone as the messages often have attachments with documents and photos. The data remains secure as they are end-to-end encrypted. They’re protected with a key derived from information unique to the device, combined with the device passcode – which only the device owner should know. That means no one else could access or read the data.

The update addresses the “Black Dot” Unicode bug that could crash apps on iOS devices with a specific character sequence involving certain emojis. Following the release of iOS 11.4, this particular sequence of characters will no longer cause apps like Messages to crash.

For iPhone 8 and iPhone 8 Plus users, there is also a new RED wallpaper that will be available with the update however not available for iPhone X users.

iOS 11.4, the fourteenth update will be available for all devices including the iPhone 5s and later, the iPad mini 2 and after that the iPad Air and the 6th generation iPod touch. To access the update on your device go to Settings -> General -> Software Update.