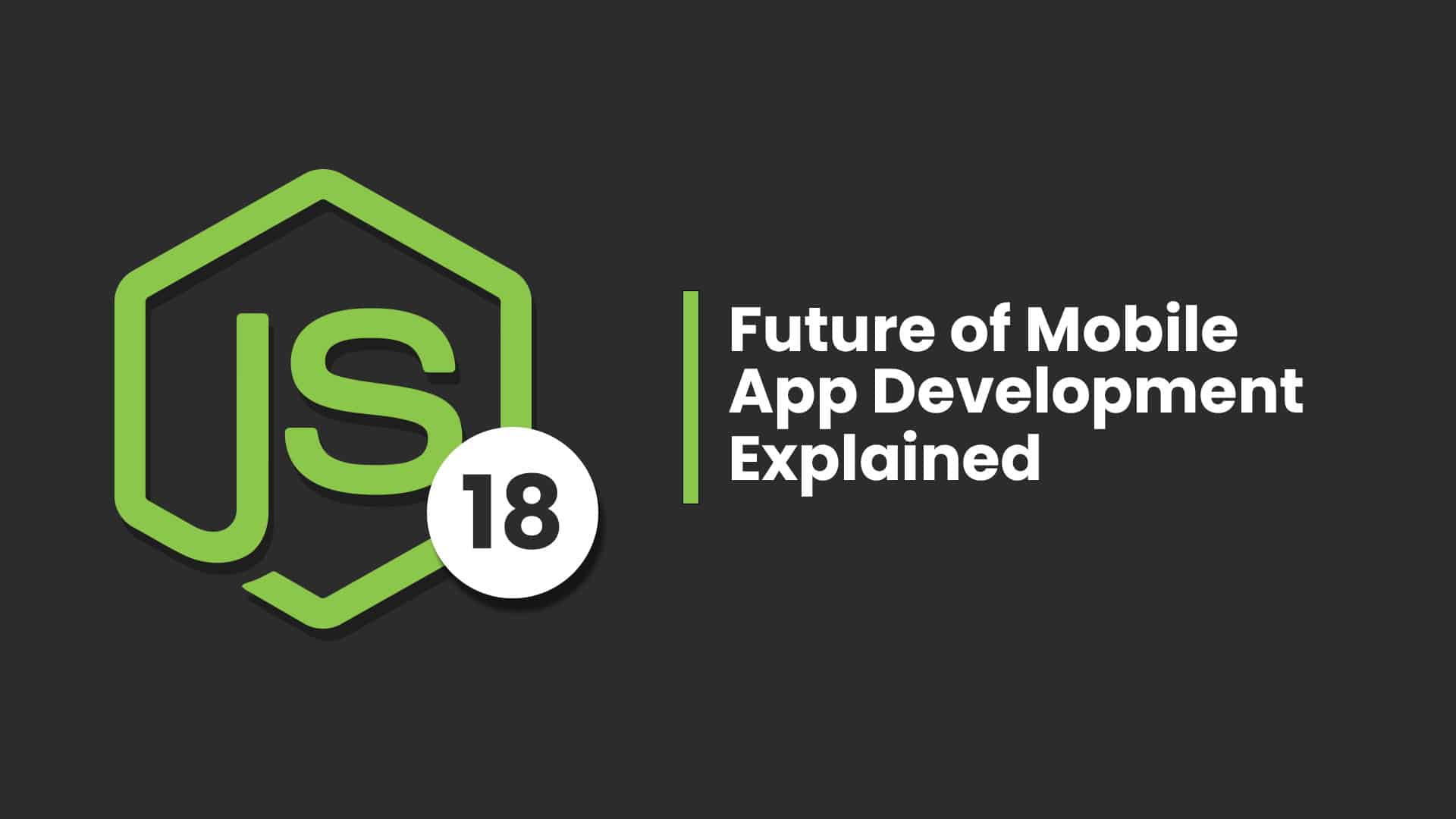 Mobile apps are all about a wonderful, smooth experience and Node.js is the perfect fit for this. It is a fantastic element that every mobile app developer should know about. Today, more than 85% of people across the globe depend on their smartphones for their daily needs. This is why smart companies are backed by the best Mobile app companies in dubai. It helps to build their dream Mobile app development business that will have the optimal functionality and software. This is why we would like to throw light on Node.js 18, which promises to offer a lot of scope to both mobile applications and desktop applications with ease.

For the next 30 months, regular security and stability upgrades will support Node.js 18 as an LTS version. The fact that this is a fresh release means that work on it is continuing, and as a result, we may anticipate frequent updates. We can see Version 19 published six months later, in October 2022. It will be the “active LTS” release. Bug fixes, security patches, and new features from the current version will be backported to the active LTS release. Only security and bug fixes will be applied to an LTS version once it has been in maintenance mode for at least two years after its release. If you are one of the website development companies in UAE that wish to grow big, then this article will be one that you can bookmark.

What is Node.js 18 in Mobile App Development?

Node.js stands out as the best alternative for designing flexible web development in this digital age. For companies that have a website, then you need to level up your business with the help of a mobile app development backed by Node.js18. With the assistance of Mobile Application Development Companies in UAE, you can own Node.js powered mobile apps that will gain the market within a short period.

Mobile app development companies use Node.js for building scalable real-time and data-driven apps. REST APIs, and desktop and mobile applications are all supported by this Javascript runtime environment. To maintain the framework viable and functioning, the Node.js ecosystem is constantly evolving.

V8 Javascript engine version 10.1, global fetch by default, and a core test runner module are among the new features in Node.js 18. Let’s take a quick look at what’s new and exciting in Node.js 18!

Node.js executes JavaScript using Google’s V8 engine, which was built for Chrome. The V8 engine is the only place where we can make modifications to how JavaScript is used in Node.js.

Node.js now has access to V8’s array functions findLast and find last index thanks to the 10.1 update. The last or number of an element in a collection that passes a search function is returned by these methods. Like Array. find, Array.findLast explores the array in reverse order, except it starts at the end of the array. Simply said, Array.findLastIndex delivers the item’s index, not the object itself.

A higher-order function is sent as an argument to both methods, which then uses this function to call each item in a list and return true only if the function’s return value is 1. Minor performance enhancements are also included in the V8 engine’s 10.1 version, which may be seen in the change log on the V8 project blog.

A built-in test runner for node.js frameworks has never existed until today. The test runner module is only accessible with the node: prefix because of the development of the Node.js framework. With the new Node.js 18 functionality, there is no longer a requirement for additional packages to build tests.

Only a portion of the test runner modules like jest or mocha is completely replaced by the core test runnable module. Although it does not need any additional dependencies to run a test suite, it does give a direct and immediate means to execute it.

The node: test module simplifies the process of writing JavaScript tests that output results in TAP format. Run the following command to do this:-

This new Node.js 18 feature allows the application to be tested using the built-in module, rather than relying on third-party testing tools. If you are having the older version, make sure to take guidance from top website development companies in UAE, to give a secure upgrade. It will boost the performance of the website.

Fetch is a popular API for making HTTP or other network queries on the web. In the past, developers had to install a number of different programs in order to collect and analyze data from various APIs. Creating an HTTP request from scratch or using a third-party package was your only alternative. It’s a problem that has been solved with the release of Node.js v18, which includes this feature by default.

For the time being, the global fetch API is enabled by default. The XMLHttpRequest API, which was previously used to make HTTP requests, required a large number of lines of code to make a single request. The Fetch API may now be used to send an HTTP request with ease, thanks to new functionality in Node.js 18.

As a result of this change to Node.js 18, the following are now available:

Run the following command to add it to your Node.js project:

A new API will be labeled experimental until more testing is done. Contributors have confirmed that the API meets as many of the API’s criteria as is practicable.

In 2022, do you know that the industry regards Node as the most engaging piece of Javascript software? Well experienced web developers create multi-user, real-time apps besides those that employ responsive web design.

Node.js is the most widely used framework for constructing web and mobile apps. It allows programmers to design complicated communication applications. LinkedIn, Netflix, IBM, Walmart, Paypal, GoDaddy, and a slew of other well-known Internet companies have come to rely on Node.js. There is a large and active Node.js developer community that is continually working to improve the framework.  That is more useful to developers, provides new APIs, reduces runtime overhead, etc. It aids the process of creating a seamless Mobile app development process.

In addition, Node.Js 12 was deprecated and removed in April 2022 from active development. Install Node.js 14 (LTS) or 16 instead (LTS). A look at our portfolio will give you a fine picture of how quality websites have been given life here.  If you have understood the advantage of Node.js 18’s new features, you can have a quick consultation with our mobile app experts in Dubai to know how we work on such projects. We are one of the leading website development companies in UAE that bring forward great user experience in every web design.  Whether it is for a desktop or a mobile app, we build cost-effective mobile apps in Dubai. We also work upon highly functional and secure websites that are responsive and earn the attention it deserves.