Facebook has officially announced the launch of Watch Party, a feature that lets people in Facebook Groups watch live or pre-recorded videos together (and chat) in real time. 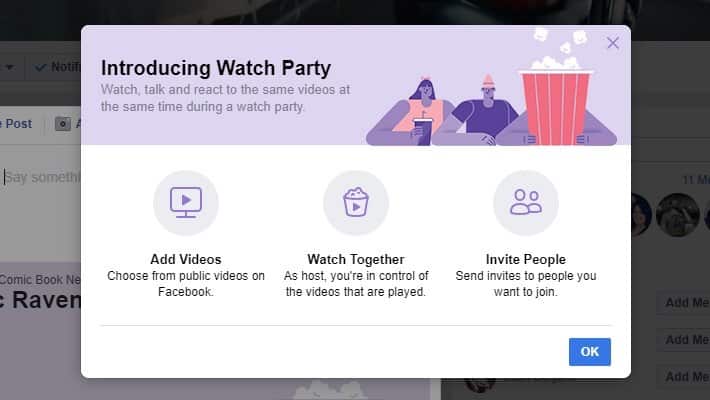 The social media company has been testing out the communal viewing feature for a few months now. It lets people in Facebook groups watch live or recorded videos together while interacting in real time. With this feature, everyone in a dog lovers group can get together to view clips of golden retriever puppies, while Anglophiles can relive the royal wedding.

Anyone in a group can start a Watch Party and designate co-hosts, who control the playlist and playback. Everyone can suggest videos, and a Facebook notification tells them a party is about to start. Users can ask questions, leave comments or add reactions in real time.

This type of feature is one that lots of people request from Netflix and Spotify. People want to enjoy content with friends or family even when they’re apart. Facebook has invested heavily in its Watch content, so it’s not surprising to see the company building out additional features. Multiple people can “host” the Watch Party, which gives them the ability to choose videos to add. Attendees can suggest videos but not actually play them. For now, Watch Parties can only be started within Groups — not Pages — and the videos have to be hosted on Facebook itself, although they can be Live or prerecorded. The company first announced and starting testing Watch Party in January.